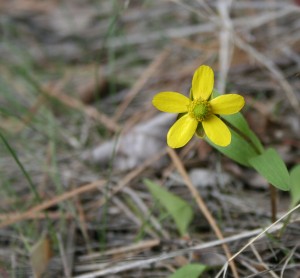 Ever since I was a child…as far back as my memory goes, I remember that flicker of excitement within when I would catch my first glimpse of the bright yellow Buttercup flower. It signified that spring had FINALLY won the battle over winter.

I don’t often get time to walk these day, but being Sunday I stole a half hour of fresh air with my lab Lyla and off we went. She raced around in sheer delight at the freedom. We crested a hill in the woods and instead of feasting my eyes on the vista before me, I caught sight of the color at my feet. Buttercups.

Out of the endless expanse of brown, dead winter-worn countryside emerged a burst of color, one flower at a time. Ahhhhh, can’t tell you how powerful that moment was.

It brought to mind my prayer from the day before. Though disappointed, I had asked God to once again encourage my soul and prove He was a God who cared about the details.

Our business launched 3 spring Open House Extravaganzas with Radio stations on location, coffee and goodies and smoking good deals. This was no small feat  to organize and took months of planning. Not to mention the time and money involved to make this a success. However, one caveat remained totally out of my control…nice weather was imperative when trying to encourage the community to buy a new lawnmower or grass trimmer etc..

Normally we are well into spring by the end of March... but not this year!

Last week we hosted the Open House in our Vernon location and it snowed. To make it even more painful, our competitor had their Open House on Sunday (which is the Lord’s Day of rest) and they had a beautiful sunny warm day. This Friday again in our West Kelowna location it rained. (Have you ever seen helium balloons weighted down by rain? What a pathetic sight!  Kinda like a bird with a broken wing, what is supposed to fly lies groveling in the dirt.)

Yesterday fairly discouraged by the lack of co-operation in the weather department and not because we had forgotten to pray either, I dropped to my knees in discouragement.

“God,” I whined, “Do you really care about the details of life, or are we left alone to muddle through?” Feeling sorely tested, my prayer came forth as a complaint.

I felt the Spirit encourage me to ask for specifics. What did I want to prove that God did care about the details.

“Well,” I responded, “Let’s see… I would like sunshine, even thought the forecast is calling for rain. I know it is unseasonably cold God, but I want the temperature to get up to at least 15 Celsius (70 Fahrenheit) so I we can put tractors outside for demonstration. And if you had rain on the schedule…not until after work please. Oh and God, let it be smoking busy!”

With not more than a second thought I bounced up and headed off with a thousand details on my mind to finish before opening.

At 2:00 in the afternoon I popped in my car to go get pizza for our hungry crew who had not had time to breathe due to the heavy crowds. I looked down at my thermometer in the car and guess what…15 Celsius (70 Fahrenheit) exactly, with the sun blasting through my window. I laughed in sheer delight as my prayer of earlier that morning came flooding back.

Guess when the storm clouds rolled in, the temperature dropped to 0 and heavy rain started? Yep, on my way home from work.

Then again today, I see that first burst of yellow upon the hillside and I am dully reminded, the same God who changes seasons and orchestrates the universe though not a puppet on my string, will at times send definitive answers to specific prayers because He wants me to remember…through the simple gift of a Buttercup that He is in control.

Don’t Waste the Pain
Subscribe via RSS
Let’s stay in touch? Updates, book release information, recipes, contests, free give-aways and more. Sent out monthly with the guarantee your email address will not be shared.