Australia, the land of my healing. Part 4

Dear reader, as you can see by the title this is an on-going series. If you have joined today, please go to the bottom and click on previous posts and begin at part 1  for greater clarity and benefit.

AUSTRALIA, THE LAND OF MY HEALING

When I left for Australia, I understood very little of why this time away was important. Though I hugely benefited from the physical and emotional rest, over time the main reason became clear. I had lost trust in the goodness of God. I still believed in God, just not in his goodness, love, or care of me personally. My Spiritual life needed an infusion of trust. I also needed to trust myself, and my ability to make a sound decision. Betrayal had stolen my confidence, my happiness, my hope.

When I look back and analyze  why God did not have me run off immediately to Australia, I see His divine timing. First, I had to face the shock and accept my new reality. Secondly, I had to grieve and let sadness have its day. A year after disclosure I had waded through the shock and the sadness but anger became an ever increasing friend. It bubbled up hot and eruptive most days. At this point, God had me face the facts. I did not trust Him, anymore than I did my husband...and I was angry at both of them.

God's first plan of attack was to separate me from all comfort zones, and make me trust in nothing but HIS provision.

I’m blown away by God’s provision. First, I was picked up at the airport by a Christian couple (Steve and Karen and their best friend Jenny). This was no small thing—Sydney International airport is massive and they had to drive an hour and a half from their tiny seaside community of Shell Harbor to pick up a stranger. They would accept nothing for their efforts.
Though having never met them before, I instantly felt a kindred spirit. (God had this planned way ahead of time. When my son Joshua went to Australia and became friends with their son, our eventual meeting was preordained. )
They put me up in their home before setting me up with a house-sitting deal too good to be true. Steve helped me find a car, and took me out on my first road trip driving on the “wrong” side of the road. What bravery.
Jenny and Karen embraced me like a long lost friend and introduced me around at church. I have had numerous invites for supper and Christmas gatherings.
Wow? All this in the first 10 days—and I’m within walking distance of the beach. Even in my wildest imaginings, I could not have conjured up this kind of extension of love.
I had begun to feel that God didn’t care about the details of my life—could I be wrong? 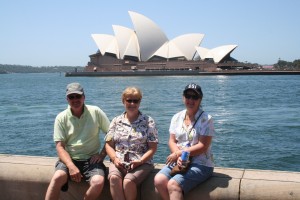 Above is a picture of Steve, Karen and Jenny...I call these friends the extension of Christ. The hands of kindness, the arms that reached out and hugged, the voice of wisdom over a hot cup of java, the love of God displayed for no other reason other than to live out their Christianity. Through them my trust in God was restored, and I shall be forever grateful. I dedicate these next number of posts to them.

Dear Reader, if you are struggling to believe in a good God in the midst of a life that appears anything but good, please continue to read each week. Listen to how my story unfolds and believe in a God that will do the same for you. I am nothing special. I have no greater connection to God than you. Therefore I know, though your story will be different, He will find the most amazing way to bring you back into a place of trust with Him.