Healing Hand of God Disappointed in Life?
Blossom Turner
1415 Hits
0 Comments
Thanks for joining me while I work through posting a chapter of my book  called “Friendly Fire.” This chapter primarily deals with the difficulty of trusting in a good God when life is not good. If you have not read my blogs before, please go back to Part 1 and begin there for greater clarity.
The hard work of accepting God's sovereignty began on those sun-drenched beaches of Australia, cradled in the love of some amazing Christians God brought into my life. Half the battle was admitting I did not like nor accept the life God had given me. This life did not fit in with my concept of a loving God full of blessings. A hard question presented itself.  “Shall we accept good from God, and not trouble?” Job 2:10.
A real “ahha” moment occurred when I read Acts 4. The crucifixion, resurrection and ascension of Jesus had taken place and the Holy Spirit had descended upon the apostles. Peter, who had previously denied the Lord, became filled with power. Amazing miracles transpired and many people became believers. Thrown in prison for preaching about the resurrected Christ, Peter and John’s response was truly remarkable. They didn’t grumble or complain, nor ask for deliverance, nor whine about the lack of blessing, instead they prayed the following prayer.

‘“Sovereign Lord,” they said, “you made the heavens and the earth and the sea, and everything in them. You spoke by the Holy Spirit through the mouth of your servant, our father David:
“‘Why do the nations rage and the peoples plot in vain? The kings of the earth rise up and the rulers band together against the Lord and against his anointed one. Indeed Herod and Pontius Pilate met together with the Gentiles and the people of Israel in this city to conspire against your holy servant Jesus, whom you anointed. They did what your power and will had decided beforehand should happen. Now, Lord, consider their threats and enable your servants to speak your word with great boldness. Stretch out your hand to heal and perform signs and wonders through the name of your holy servant Jesus.”
After they prayed, the place where they were meeting was shaken. And they were all filled with the Holy Spirit and spoke the word of God boldly.’ Acts 4: 24-31
These apostles began prayer with the acknowledgement of God’s sovereignty. In the worst of circumstances, with their life on the line, they acknowledged who God was, is, and evermore will be. They asked God to consider the threats, but did not ask for deliverance, instead asked for boldness to speak, and for healing and miracles in the name of Jesus.

Wow! How incredible to just accept God’s sovereignty in faith, and ask for the miracle of healing. How different from my way of handling pain. I demanded answers. I needed to know how and when I would heal. I insisted on understanding the "WHY" rather than live in faith. This prayer opened my eyes to an integral piece of the puzzle I had missed thus far. My healing could not move forward until I accepted the sovereignty of God.

The sovereignty of God is not a hard pill to swallow when life is grand and full of beauty, blessing and bounty, it however, is a much more difficult task in times of pain and loss. There is no way down the path of healing apart from accepting the following truth...God is sovereign. God is in control even when life is out of control. God is love.

NEXT WEEK I WILL CONCLUDE THIS CHAPTER. 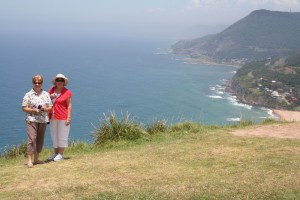 TWO AWESOME FRIENDS GOD BLESSED ME WITH, WHILE IN AUSTRALIA.

Tweet
Your Inner Healing Depends Upon This Truth...Part ...
IS GOD ONLY A GOD OF BLESSING or DOES GOD ALLOW PA...

No comments made yet. Be the first to submit a comment